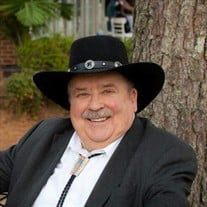 Thomas Foy Stone, age 80 affectionately known as “Stoney” passed away quietly at his son’s home, on Friday, January 17, 2020 in Winder, GA where he lived for the past 8 years. Stoney was born in Tifton, GA on October 14, 1939 to the late Dewey Malone and Mary Olive Eubanks Stone. Stoney was an only child. Stoney lived in Tifton GA, until his parents moved to Miami, FL where he graduated from Miami Central High School. All through high school, he worked at Puritan Dairy After graduation, he worked at Channel 4. He loved the military so he joined the United States Marine Corps for the next 4 years, then being honorably discharged on a hardship due to his father’s illness. After his father’s death, Stoney and his mother moved to Albany, GA where upon he went to work at Carlton Company Caterpillar. He retired on November 30, 2001 after 36 years of service. During his tenure at Carlton, Stoney missed the military so he joined the Georgia Army National Guard in Dawson, GA staying 17 years, retiring as E-7 on February 23, 1996 with 21 years of military service. Stoney is survived by his wife, Carylon Annette Willis Stone of nearly 47 years of marriage. She resides in Winder, GA, a son, Robert Jess Burnett and wife Rhonda Casey Burnett of Winder, GA, a daughter Kimberley Shannon Stone Waskiewicz and husband Andrew (Andy) of Watkinsville, GA five grandchildren, Christopher Ferrell (Kaci) of Leesburg, GA, Casey Malone Burnett stationed with the US Navy in VA, Allison Leigh Burnett of Winder, GA, Joshua Stone Waskiewicz and Ava Rose Waskiewicz of Watkinsville, GA, two Great Grandchildren Emily Juanita Ferrell of Leesburg, GA and Gunner Payne Sweet of Winder, GA. He is preceded in death by a Great Grandchild Avery Justice Ferrell . A visitation will be held at Carter Funeral Home, Winder, GA on Tuesday, January 21, 2020 from 6:00 P.M. until 8:00 P.M. An additional visitation will be on Friday, January 24, 2020 at Banks Funeral Home in Sylvester, GA from 6:00P.M. until 8:00 P.M. Interment will be held in the Willis Family Plot in Pine Forest Cemetery in Worth County, GA on Saturday, January 25, 2020 at 2:00 P.M with Rev. Terry Hawkins and Rev. Brian Bailey officiating. Military Honors provided by the USMC Honor Guard. Carter Funeral Home of Winder is in charge of local arrangements where online condolences may be expressed at www.carterfhwinder.com

The family of Thomas Foy "Stoney" Stone created this Life Tributes page to make it easy to share your memories.