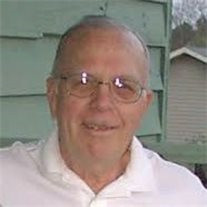 Mr. Robert M. "Bob" Akin, age 88, of Winder, and Jefferson, Georgia passed away June 12, 2017. A native of Norman, Oklahoma, Mr. "Bob" was preceded by his wife of fifty-nine years, Kathryn Sue Akin and son, Robert E. Akin. Mr. Akin served in the United States Army during the Korean Conflict. He retired as General Manager of The Overhead Door Company of Atlanta and had attended The Whistleville Christian Church. A graduate of Norman High School, he married his high school sweetheart, Kathryn Sue Kimmons. The couple moved to metro Atlanta in 1956 and spent his career with Overhead Door of Atlanta. They spent many years moving between Georgia and Oklahoma where they owned and operated The Flying A, before relocating to Winder in 2003 The Family will receive friends Friday, June 16, 2017 from 6:00 P. M. until 8:00 P. M. at Carter Funeral Home. A Funeral Service will be held Saturday, June 17, 2017 at 11:00 A. M. from the Chapel of Carter Funeral Home with Linwood Smith, Dr. Garey Huff, Sr. and Norma Jean Birt officiating. Interment services will be private. Surviving are Son and Daughter-in-law, Alan and LeAnne Akin of Winder, Daughter-in-law, Toni Akin of Lawrenceville, Best Friend and Caregiver, Norma Jean Birt of Jefferson, Grandchildren, Katie Akin and Chris Akin, Great Grandchildren, Will and Bobbi, Brothers-in-law and Sisters-in-law, Bill and Betty Kimmons of Cartersville, Georgia, Lorene and Eddie Cook of Norman, Oklahoma, and several Nieces and Nephews. Flowers are welcomed or memorials may be made to the Barrow County Historical Society, P. O. Box 277, Winder, Georgia. 30680, or to a charity of your choice.

The family of Mr Robert M. "Bob" Akin created this Life Tributes page to make it easy to share your memories.