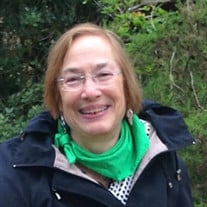 Patricia “Pat” (Martin) Harkey, 78, died on Wednesday, November 11, 2020 after a long struggle with Alzheimer’s disease. Mrs. Harkey was born in Greenville, SC to the late Doris (Gooch) Martin and John Robert Martin. Mrs. Harkey and her husband Barton R. Harkey, Sr. have been residents of Winder since 1968. In addition to her loving husband, Mrs. Harkey is survived by her sister Sharon Moss of Greenville, SC, her daughter Marie (April) Alford-Harkey of Palm Beach Gardens, FL, son Bart (Kimberly) R. Harkey, Jr., of Statham, GA and granddaughter Cameron Harkey, who was the light of Mrs. Harkey’s life. She was preceded in death by her parents and her brother Robert M. Martin. Mrs. Harkey had a long career with the Food Safety and Inspection Service, beginning as a lab technician and retiring as a chemist after earning her Bachelor of Science degree in 1999. She loved to travel. She made numerous trips to Europe including France, Italy, Ireland, England, and Poland. She was an active member of the Classy Hat Chapter of the Red Hat Society. Services will be held on Sunday, November 15 at 2 pm in the Chapel of Carter Funeral Home with Rev. Marie Alford-Harkey officiating. The family will receive visitors on Saturday, November 14 from 6 pm to 8 pm at the funeral home. In lieu of flowers, donations may be made to St Jude Children’s Research Hospital, 252 Danny Thomas Place, Memphis, TN 38105.

The family of Mrs. Patricia M. Harkey created this Life Tributes page to make it easy to share your memories.