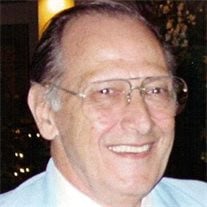 Marlin Fredrick Goff of Winder, Georgia and formerly of Baltimore, Maryland and Chillicothe, Ohio passed from this life to his eternal home on October 29, 2012, after a courageous battle with cancer. Marlin's life began December 14, 1935 in New Holland, Ohio, son of Monte Freeland Cho Goff and Gelina Mae Dozer Goff. His early life was a struggle as his mother and brother died early. He was raised in a rural family and worked various odd jobs, including oil field service, mechanic, and a race car driver. He married his wife of 51 years, Marcella Louise Huffman Goff on February 4, 1956 in Richmond, Indiana. They lived in Chillicothe, Ohio where they started their family. She predeceased him. Marlin was an industrious and hard working man with a winsome wit. He worked for Western Electric as a cable installer and was promoted to estimator for AT & T and moved to Baltimore, Maryland. While living there, Marlin was active in the International Optimist Club, and became a district commissioner for the Boy Scouts of American. He was also a proud member of the Telephone Pioneers of America. A subsequent promotion brought him to Atlanta, Georgia, where Marlin was instrumental in establishing the foundations of cable, telephone and data transmission. After his retirement, he began a new career as tax preparer for H & R Block for nineteen years. He is well known in his community as a loving and sincere man who always tried to help others. Marlin is survived by s son, Fredrick Goff of Old Saybrook, CT and his wife Ralene, his daughter, Angela Sue and her husband, Allen Boatright on Snellville, Georgia, Five grandchildren, Two step-grandchildren, and five great-grandchildren. A Funeral Service will be held at 2:00 P. M., Wednesday, October 31, 2012 from the Chapel of Carter Funeral Home with Linwood Smith officiating. The Family will receive friends, Tuesday, October 30 from 6-8 P. M. at the funeral home. Private Burial will be in Allensville, Ohio.

Marlin Fredrick Goff of Winder, Georgia and formerly of Baltimore, Maryland and Chillicothe, Ohio passed from this life to his eternal home on October 29, 2012, after a courageous battle with cancer. Marlin's life began December 14, 1935 in... View Obituary & Service Information

The family of Mr. Marlin Fredrick Goff created this Life Tributes page to make it easy to share your memories.

Marlin Fredrick Goff of Winder, Georgia and formerly of Baltimore,...