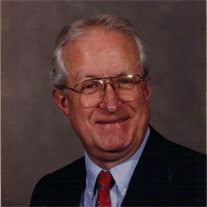 John Virlyn Toney, a consummate southern gentleman who never met a stranger, departed this life peacefully among many of his immediate family and close friends on September 2, 2015, after a four year-long battle with Parkinson's disease. Virlyn was born December 9, 1931, to the late Jett Toney and the late Julia Adams Toney. He was predeceased by Betty Dickens Toney, his beloved wife of 17 years. Surviving this marriage are daughters, Janalyn Raye Toney (Perry Eller) of Decatur, Georgia and Jeanie Toney Warbington (Teel) of Vienna, Georgia. Virlyn married Joann Hale Burrell in 1984, and with this union he gained stepsons Steve Burrell (Carol) of Gainesville, Georgia, and Glenn Burrell (Melinda) of Watkinsville, Georgia. Also surviving are his grandchildren Scott Burrell (Lisha) of Watkinsville, Georgia, Lee Burrell of Chicago, Illinois, Ryan Burrell of Watkinsville, Georgia, Lauren Warbington of Vienna, Georgia, Bradee Burrell Aderholt, (Drew) of Gainesville, Georgia, Austin Warbington (Elizabeth) of Vienna, Georgia, Madison Warbington of Vienna, Georgia and four great grand-children - each of whom held a special place in Virlyn's heart. He delighted in all of their respective accomplishments and successes. Virlyn was a faithful member of the Winder First Baptist Church and the Brotherhood Sunday School Class. He worked for Walton EMC for over thirty-eight years, and in retirement, he extended blessings to many others as a dedicated volunteer at Park Place Nursing Home in Monroe for over seven years. He served in the United States Army National Guard in Monroe for eleven years, and had been a member of the Monroe Generous Warren Masonic Lodge since he was 21 years old, proudly serving as Worshipful Master at one point. Survivors include his wife, children, grandchildren, great grandchildren; his sister Ermine Toney Davis (Carl) of Monroe, Georgia and many nieces, nephews, cousins, and friends. Virlyn's family wishes to express heartfelt gratitude to the many friends who have blessed them through their actions and prayers, with special thanks to his personal home care givers, Brenda Rutledge and Desie Rutledge, his nurse and good friend, Christy Marbut, his friends and staff at Magnolia Estates, the doctors, nurses and Hospice staff at Northeast Georgia Medical Center - Braselton, and to friend and personal physician, Dr. Garey Huff, Sr. The family will receive visitors on Friday, September 4, 2015, from 12:00 p.m. to 2:00 p.m., at Carter Funeral Home at 265 GA-211 in Winder, Georgia, with funeral services conducted by Reverend Kennedy Smart to immediately follow at the funeral home. Interment will follow at Hill Haven Memory Gardens, 490 Edmondson Road NW, Monroe, Georgia. Memorials may be made to the Winder First Baptist Church Building Fund or to Hospice Care at Northeast Georgia Medical Center.

John Virlyn Toney, a consummate southern gentleman who never met a stranger, departed this life peacefully among many of his immediate family and close friends on September 2, 2015, after a four year-long battle with Parkinson's disease. Virlyn... View Obituary & Service Information

The family of Mr. John Virlyn Toney created this Life Tributes page to make it easy to share your memories.