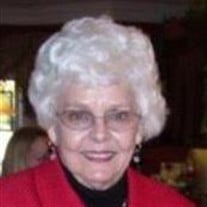 Willie “Joann” Hale Burrell Toney December 30, 1929 – October 7, 2019 Just as she always loved a gathering with family and friends, Joann Hale Burrell Toney departed this life peacefully among many of her immediate family and close friends on October 7, 2019 as a result of complications from a stroke she suffered in June of this year. A devoted and generous kitchen magician, Joann was friend to everyone that entered into her life and she took pride in remembering and preparing the favorite dishes and desserts for each member of her family and friends. No matter how short the notice or how many surprise guests appeared for dinner, Joann lovingly made certain that no one ever left her home hungry or feeling unloved. Joann was born on December 30, 1929 at her grandmother’s home in Walton County, Georgia. She was the fourth of six children born to Euphratus Lee Hale and Pearl Mitchell Hale. Graduating from Monroe High School in 1946 she was first employed at the Walton County Court House where she met Quillen Dupree Burrell, and the two were married in 1950. After the birth of her two sons, Steven Lee and Glenn Scott, she went to work for the First Baptist Church of Winder as the pastor’s secretary. In 1969, Joann joined the team at Johns Manville in Winder and enjoyed a 22-year career, developing many close and enduring friendships. Sadly, Joann lost Quillen to cancer in 1979; but being the beautiful and wonderful person that she was, in a few short years she met and married Virlyn Toney in 1984 and with this union, she gained two wonderful stepdaughters, Janalyn Raye Toney and Jeanie Toney Warbington. After retiring from Johns Manville in 1991, Joann directed her boundless energy into award winning volunteer work in her beloved Winder, Georgia community, including heading up The Clothes Closet, volunteering as the church librarian at the First Baptist Church, teaching Sunday School, and working at the local voting poll - to name a few. In 2003, Joann was named Volunteer of the Year by the Johns Manville Fund. Joann was preceded in death by her parents, Euphratus Lee Hale and Pearl Mitchell Hale; husbands Quillen Burrell and Virlyn Toney; brothers Euphratus Lee Hale, Jr. (and his wife, Florence) and Bob Hale; and sister, Dean Impeciato (and her husband, Vic). Survivors include her sons Steve Burrell (Carol) of Gainesville, Georgia; Glenn Burrell (Melinda) of Watkinsville, Georgia; stepdaughters, Jana Toney (Perry Eller) of Decatur, Georgia, and Jeanie Warbington (Teel) of Vienna, Georgia, brothers Charles Hale (Jean) of McDonough, Georgia; and Gerald Hale (Pat) and sister-in-law, Betty Hale of Monroe, Georgia. Also surviving Joann are her grandchildren Scott Burrell (Lisha) of Watkinsville, Georgia; Lee Burrell of Gainesville, Georgia; Ryan Burrell (Chelsea) of Cleveland, Tennessee; Lauren Fletcher (Michael) of Vienna, Georgia; Bradee Burrell Aderholt, (Drew) of Gainesville, Georgia; Austin Warbington (Elizabeth) of Vienna, Georgia; Madison Warbington of Vienna, Georgia and eight great grandchildren - each of whom held a special place in Joann’s heart. She delighted in all of their respective accomplishments and successes. Joann’s family wishes to express heartfelt gratitude to the many friends who have blessed them through their actions and prayers, and to the doctors, nurses, and staff at Northeast Georgia Medical Center – Gainesville, and to their special friends and especially physicians, Dr. Craig Brown and Dr. Krupa Desai. The family will receive visitors on Wednesday, October 9, from 5:00 p.m. to 7:00 p.m. at Carter Funeral Home 265 GA-211 in Winder, Georgia. Joann’s memorial service will begin at 2:00 on Thursday October 10th at the First Baptist Church in Winder. Prior to the service, the family will receive visitors at 1:00 at the church. Interment will follow at Barrow Memorial Gardens at 793 Atlanta Hwy SE, Winder, Georgia. Memorials may be made to the First Baptist Church – Winder Building Fund or a charity of your choice.

The family of Mrs. Joann Hale Toney created this Life Tributes page to make it easy to share your memories.