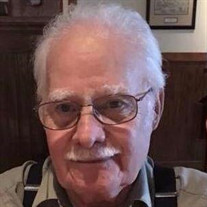 Herman Edwin (Sonnie) Willis age 75 went to be with his Lord on Thursday January 24, 2019. Born in Kennett, Missouri February 1, 1943, he grew up in Treasure Island, Missouri. A 1961 graduate of Hornersville High School, Mr. Willis soon went to work for Randall Textron in Blytheville, Arkansas. He served two years in the United States Army before returning to work at Randall Textron. Later he was employed at Peachtree Tool and Die in Braselton, Georgia until his retirement in 2001. Mr. Willis was an active member of the Chestnut Mountain Church of Christ. One of the greatest enjoyments of his life was spending time with his family. He is survived by the love of his life, his wife of 31 years Willene Willis. Their love for each other grew more every day. Through notes and words, he showed her daily how much he loved her. His little love notes started a tradition for visiting family and friends to do the same. Also surviving him are his brothers, Charlie (Cecelia) Willis of Columbia, Tennessee and Ron (Teresa) Willis of Bells, Tennessee. Daughters, Sheila (Craig) Barthel of Billings, Montana, and Amy Willis of Washington State. Grandsons, Jackson and Austin Barthel of Billings, Montana and Evan Barthel of Helena, Montana and Jonathan Seitz and Stefan Bush of Washington State. Granddaughter Melissa Seitz of Washington. As well as a host of numerous nieces, nephews and great nieces and nephews. The love he shared and inspired was something to behold and touched the soul of each person he knew. Mr. Willis was preceded in death by his parents, William Herman & Victoria (Essary) Willis, a brother, Willie Clifton Willis and a daughter, Sherry Schroeder. Funeral services for Mr. Willis will be held Monday, January 28, 2019 at 11:00 A. M. from the Chapel of Carter Funeral Home with Brother Ron Cope and Brother Seth Michael officiating. Burial will be in Barrow Memorial Gardens. The Family will receive visitors Sunday, January 27, 2019 from 2:00 P. M. until 4:00 P. M. at the funeral home. A special thank you to Carolyn and Tom Harper for their love, support and kindness during his illness. In lieu of flowers, please send donations to Georgia Agape.

The family of Mr. Herman Edwin (Sonnie) Willis created this Life Tributes page to make it easy to share your memories.

Herman Edwin (Sonnie) Willis age 75 went to be with his Lord...