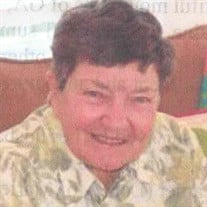 Helen B. Kent, 86, passed away on September 15, 2021, after a brief illness. Born on May 10, 1935, in Miami, Florida, the oldest daughter of Frank Stanton and Helen McWhorter Bondurant, the Bondurant family moved in 1944 to Winder, Georgia, where she attended Winder Public Schools, graduating in 1954. She was a forward on the Winder girl’s high school basketball team that played in the state semi-final games. She was graduated from University of Georgia with a B.A. degree. She received her Master’s Degree in Physical Education from Florida State University. Her long career in teaching extended from 1962-1991 with Dade County Public School System, Florida. Following her retirement, Helen was married to Edward Bartley in Franklin, NC, until his death in 1995. In 1998, she met and married Roger Kent in Franklin, NC. Their happy marriage in Otto, NC, and, then, in The Villages, Florida, for 23 years, continued until her unexpected death. Helen enjoyed all sports, played tennis for 50 years, sand with Sweet Adeline’s National Women’s Chorus, belonged to a Square Dance Club in NC, and loyally followed the Miami Dolphins and Miami Hurricane teams. She organized many local tennis tournaments in Miami, and numerous board games at their home in The Villages. Helen section-hiked the Appalachian Trail with family and friends from 1987-2017, with Roger joining the hike in 1997. Many wonderful years of adventure, fun and laughter were enjoyed in the beautiful mountains of GA, NC, TN, VA, W.VA, and MD as well as in Maine, where the AT summit ends. Notable was her unselfish spirit and her focus on other’s education. Her life’s journey was one of fulfillment and adventure. She is survived by her husband, sister, Mary B Lanier, and brother in la, Warren W. Lanier, of Roswell, Georgia, Charles Lanier (Mary), of Garner, NC, and Kirk Lanier (Kim), of Boerne, Texas; and, numerous nieces, nephews and step-children. The Kent’s wishes will be fulfilled that their ashes be scattered on a section of the Appalachian Trail in NC. A memorial graveside service will be held November 14th at 2:30 PM at Rose Hill Cemetery in Winder, GA. Memorial contributions may be made to The Appalachian Trail Conservancy, P.O. 807, Harper’s Ferry, West Virginia, 25425-0807, or to your favorite charity. Carter Funeral Home is entrusted with the arrangements.

Helen B. Kent, 86, passed away on September 15, 2021, after a brief illness. Born on May 10, 1935, in Miami, Florida, the oldest daughter of Frank Stanton and Helen McWhorter Bondurant, the Bondurant family moved in 1944 to Winder, Georgia,... View Obituary & Service Information

The family of Mrs. Helen Jopling Bondurant Kent created this Life Tributes page to make it easy to share your memories.